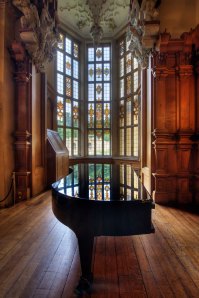 The heraldic stained glass window in the Great Hall is by the “father of Victorian stained glass“, Thomas Willement (1786-1871) (his initials can be seen in the window), dated 1837, and includes the coats of arms of Elizabeth I and James I. In the 1600s Sir Daniel de Ligne was the owner of the original Harlaxton estate. He lived in the original manor in the village and was in favour with both Queen Elizabeth I and King James I. The upper part of the window commemorates this early history. On the left are the crowned monogram E of Elizabeth I flanked by her badges and on the right the crowned monogram J of James I flanked by his badges. In the central part are the royal arms of Elizabeth and James and three crowned badges: Fleur-de-lys, Tudor Rose, and the Thistle. The lower part of the window has a series of shields of arms showing the important marriages in the genealogy of Gregory Gregory ranging from 1298 to 1702.

An analysis of the Great Hall stained glass window

If we look to the right of the fireplace in the Great Hall, we are greeted with a stained glass window that gives the visitor a sense of the owner’s family background, a window to the past, or at least the past that Gregory Gregory wanted his visitors to see.

The stained glass is by the Thomas Willement (1786-1871). He was instrumental in reviving the art of stained glass, especially heraldic glass. “Willement had been the armorial painter to George IV (1820-1830) and became, by Royal Patent, “Artist in Stained Glass” to Queen Victoria. He made much armorial glass for St George’s Chapel, Windsor, and restored its ancient windows. He was one of the 25 stained glass artists who exhibited at the Great Exhibition at Crystal Palace, 1851.”  The stained glass window at Harlaxton is dated 1837. (British Ancestry, 2007) 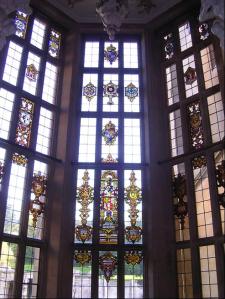 The stained glass window has the form of a triptych, and first we look at the central panel. We focus on the lower portion, the upper portion being devoted to the three monarchs, Henry VIII, Elizabeth I, and James I. More on that later! 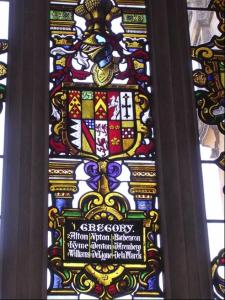 This photograph shows a close-up of the central panel and we can begin to decipher the shields. The shield shown is subdivided and numbered into ten parts, starting with the upper left showing Gregory’s coat of arms (Number 1) and then proceeding right, and then down a row, reading the shields again from left to right, ending with Number 10 on the lower right. The families are:

The lineage is explained in more detail in the left and right panels but clearly the Gregory family has a complex (if not complicated) history but Gregory Gregory saw fit to include these families while ignoring others. The De Ligne, D’Aremberg and De La Marck families are especially highlighted on the Manor exterior, on the Gatehouse, the porter’s door (D’Aremberg) and then on the roof line (De La Marck). We also recognize the Denton shield above the gatehouse.

After de-coding the shields, it is surprising that so many of the exterior shields refer to families whose wealth and prominence rested largely on the continent. But this emphasis might not be so unusual given the nature of the families referenced, and the nature of the person doing the referencing. 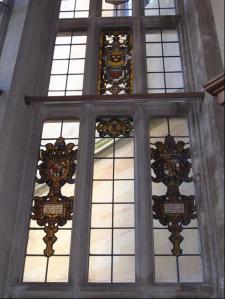 We turn our attention to the stained glass window panels on the right, to get an edited version of Gregory’s family tree and connections to the continent.

At the top of this triangular arrangement of shields is a combination of De La Marck with D’Aremberg which is also seen at the Gatehouse. The writing below the shield records the marriage of Engelbert De La Marck to Matilda D’Aremberg. Continuing to the bottom right vertex of the triangle, the visitor sees the following. 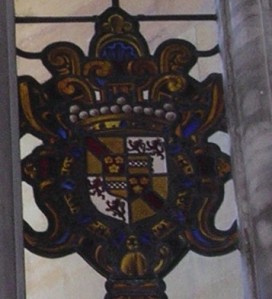 We will refer to the four quarters in the shields using the standard convention of heraldry. We notice first that the smaller shield (escutcheon of pretense) consists of the emblems of D’Aremberg on 1 and 4 with De La Marck on 2 and 3. Note two important elements of the arms. First, notice the crown or coronet that forms the crest of the arms. It is the only shield, save the shields for the monarchs, with a crown. Notice finally the element at the bottom of the shield. It is the picture of a golden lamb hanging about a chain the encircles the shield – the Order of the Golden Fleece.

Below the shield the stained glass commemorates the union in 1547 of Jean de Ligne, the baron of Barbencon with Marguerite, the hereditary countess of Aremberg. The last shield on the lower left vertex of the triangle ties this line back to Gregory Gregory. 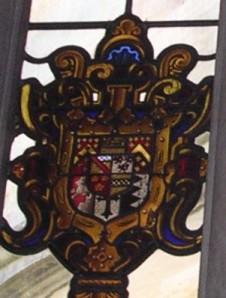 In the smaller shield we see De Ligne in Quarter 1, Barbencon in Quarter 2, D’Aremberg in Quarter 3 and De la Marck in Quarter 4. In the background, in the larger shield we see the shield divided into six parts read from left to right, starting from top to bottom: Gregory, Alton, Kyme, Williams, Upton, and Denton. The inscription below the shield commemorates the marriage in 1758 of George Gregory to Anne, the heiress of De Ligne.

Loudon notes that Gregory Gregory visited several manor houses to gather ideas in preparation for the new Harlaxton Manor. According to Loudon Gregory had fixed on the style of James I and so visited houses such as: Berkshire: Bramshill, Littlecote. Cheshire: Brereton. Derbyshire: Hardwick. Herts: Hatfield. Kent: Knowle, Cobham. Northamptonshire: Burghley House, Castle Ashby, Dean, Rashton, Kirby, Apthorpe. Nottinghamshire: Wollaton. Suffolk: Blickling. Sussex: Cowdray. Wiltshire: Longleat. Worcestershire: Westwood. Yorkshire: Temple Newsham. While Gregory would later recount to visitors that he had designed the house himself, the influence of the primary architect, Anthony Salvin, on the choice of armorial decoration should not be diminished. As Jill Allibone points out in her analysis of early drawings for the exterior of Harlaxton Manor: “Gatehouse and gazebos all bear armorial achievements decoratively framed and pinnacled, which clearly owe their inspiration to seventeenth century church monuments such as that of the Sandys at Wickhamford at Worcestershire.” (Allibone, 1987 p. 44). However, it must be pointed out that Gregory and Salvin, and any other artisan working for them, did not need to look much further than the old Harlaxton manor for inspiration in the use of armorials and heraldry.

“The family portraits, and the arms of the family in stained glass, with a pedigree written in the French language of the day, are still preserved in the house.”

Loudon in his description of the exterior of the old manor in an earlier edition of his 1840 work states:

“The entrance [to the manor] is through an arched gateway, of the form and character of the time of James I., into an outer grass court, […]. Immediately opposite is the entrance to the second court, through a gateway formed by pilasters of stone, bearing lions supporting the escutcheons of the family arms, and a screen of arcaded masonry 7 ft. high, of very beautiful design and delicate workmanship. Through this inner court there is a broad pavement of stone which leads to the porch of the house, over which is a rich entablature of masonry, bearing the family arms of De Ligne.”

Britton, et al, writing in 1807 also described the old Harlaxton manor and its decoration as follows:

“In the great bow windows are coats of arms of de Ligne, de la Fountaine, de Cordes, and other relations of the de Ligne family, who emigrated together, and became refugees in this country. In other windows are emblematical devices, and representations of events, recorded in scriptural and profane history.”

Even though Burke hoped that

“it long may stand, as one of the most curious specimens of English domestic architecture during the reign of the Plantaganets and Tudors,”

sadly there is nothing left of the old Harlaxton Manor.

Burke, John. 1853. A visitation of the seats and arms of the noblemen and gentlemen of Great Britain, Vol. II.

Loudon, John Claudius. 1990. In Search of English Gardens: The travels of John Claudius Loudon and his wife Jane. Century: London.