Salvin always built in a solid style and at Harlaxton was designing for a bachelor client, Gregory Gregory. The Entrance Hall is notable for this solidity of design, particularly the entrance doors and their brasswork by Gibbons of Wolverhampton. The door jamb is a typical Salvin design, simple but convenient.

The Manor is built in Ancaster stone from local quarries owned by Gregory Gregory. It was cheaper for him to own the quarry than to keep buying the stone. 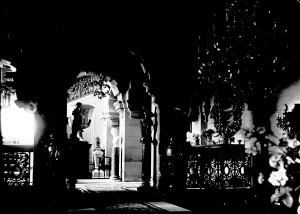 The classical fireplace with pairs of Ionic columns, thought to cover an earlier fireplace, is marble with a hardboard back panel. Dating from early 19th century, it was added by Mrs. Van der Elst in the late 1930s. This eccentric owner fitted black patterned carpet in the hall and up the staircase. It is thought she kept her husband’s ashes in an urn in the hall which got sold by mistake.

The Burmese hardwood side table in serpentine form is dated c. 1850. It has a deep pierced and leaf-carved frieze, on four cabriole legs with lion heads.

The arch at the foot of the staircase is embellished with family shields: on the right side is the De Ligne coat of arms and on the left that of the Gregory family. The stone trophy of weapons is four feet across.

At the bottom of the stairs, on a square wooden pedestal, is a 19th century stone model of the Medici vase carved in relief with classical figures.

The stone stairs show a mixture of a French Renaissance-style staircase and an ornate Elizabethan ceiling. The emblem – the bosse, as seen on Italian shields – can be seen throughout the Manor.

The ceiling, with its star compartments and pendants, is possibly the work of Francis Bernasconi and Son, Italian plasterers based in London, who were working on Stoke Rochford Hall at the time Harlaxton Manor was being constructed.

Ascending the stairs, resting on a socle, is a plaster bust of a bearded man, dated c. 1840 (moved to storage following renovation works 2016). The carved giltwood chandelier is dated c. 1900 and of a Baroque revival style, fitted for electricity.

On the upper hallway, note the large late 17th century Flemish oak relief of Hercules and Samson with club and jaw bone, above the door at the top of the stairs, most likely a Gregory purchase. There are a  number of Herculean figures and imagery throughout the Manor, for example Herculean ribbon-tied clubs flank the main entrance door. This iconography depicts the concept of “Abundance Through Labour”. Perhaps an inference to harvest, the family crest being three stooks of corn, which were sacred to Ceres, the goddess of agriculture.

The door to the State Dining Room is a double door to ensure soundproofing, the exterior door covered in a fine specimen of antique tooled leatherwork and varnished.